POSTPONED: Pathways to Leadership: The Legacy of Suffrage and the League of Women Voters in CT

POSTPONED, due to COVID-19 Pandemic.

Join us for a special lecture commemorating the centennial anniversary of woman’s suffrage.

West Hartford Town Historian Dr. Tracey Wilson will speak about the history of the Connecticut woman’s suffrage movement and the League of Women Voters through the lives of Hartford-area women and the elected officials whose minds they had to change. While Connecticut did not ratify the 19th Amendment before it became part of the Constitution, the suffrage movement developed leaders who worked on related issues of equality. In “Pathways to Leadership: The Legacy of Suffrage and the League of Women Voters in Connecticut,” Dr. Wilson will focus on the involvement of the suffrage activists in issues of child labor, the poor, elected office, representation, equality, and justice as she analyzes their organizing tactics and strategies. Examples of University of Saint Joseph women who have provided leadership will also be remembered. A Q&A period will follow Dr. Wilson’s presentation.

“Pathways to Leadership” will take place in the University of Saint Joseph’s Crystal Room located in Mercy Hall. Doors open at 5:30 p.m. for refreshments, viewing of commemorative posters recalling 100 years of history the League of Women Voters in Connecticut, and voter registration. The lecture will begin at 6 p.m. Free and open to the public. Advanced registration is recommended.

This event is presented by the Noah Webster House & West Hartford Historical Society, the League of Women Voters Greater Hartford, and the Women’s Leadership Center at the University of Saint Joseph. 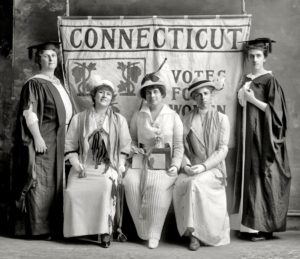 Tavern Night: A Taste of Ireland