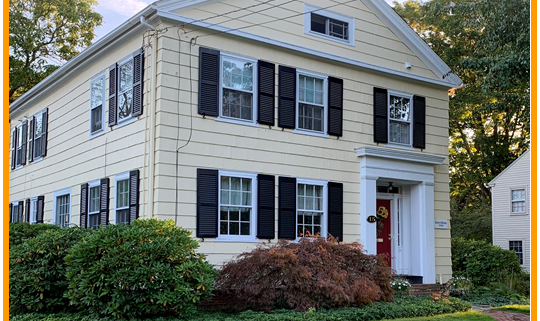 Discover 100 years of West Hartford architectural history on Sunday, November 10. Tour inside six private homes that help tell the story of how West Hartford developed into the thriving suburb it is today.

This year’s house tour will be in the “Old West School” neighborhood. Many residents will recognize the Old West School, the one-room schoolhouse situated at the curve of Sedgwick and Mountain Roads. Homes on the tour: 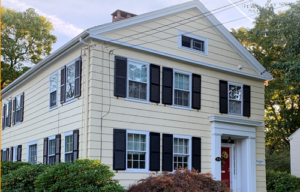 Advance tickets are $30 ($25 for members.) After Friday, November 8 and at the door tickets are $35. Get more information and tickets at www.noahwebster.yapsody.com

Ticket booths the day of the event will be located outside of 193 Sedgwick Road and 25 Buena Vista Road. Parking is available on any side street or in the parking lot of Solomon Schecter School. Rain or shine. Ticket-holders may begin at any home on the tour. Tickets are non-refundable.

Many residents will recognize the Old West School, the one-room schoolhouse situated at the curve of Sedgwick and Mountain Roads. The school was built in 1878, at a time when the town was divided into districts: Centre, South, North, Prospect Hill, East, Commons, North West, and West. Each district was required to have its own independently operated school. The location of the West District’s school was strategic to provide a central access point for the neighborhood children. At the time, Sedgwick Road was known at Park Road and it ran roughly along today’s Buena Vista Road ending at the intersection of Farmington Ave. Both “Park Road” and Mountain Road were major thorough-fares where the earliest homes of the area were located.

At the turn of the 20th century, Hartford’s elite began to leave the increasingly crowded City of Hartford for the more pastoral suburb of West Hartford. The establishment of a trolley line on Farmington Avenue provided convenient public transportation for Hartford industrialists and insurance workers who wanted to live in the suburbs. The houses they built were gracious, country-estate type homes with gardens, landscaping, and areas for outdoor entertaining. Even though the homes were built on major streets like “Park Road” and Mountain Road, the area was scenic and refreshingly quiet compared to the bustle of the city. One of the first major residential developments occurred in the “Buena Vista” neighborhood of town, which boasted its proximity to the trolley line on Farmington Avenue to prospective buyers. Later, an extension of the trolley line was laid on the section of Mountain Road south of Farmington Ave. to provide access to the ice ponds of the Trout Brook Ice & Feed Co.

Unlike other parts of the country, the real estate market in West Hartford did not slow down during the Great Depression. At that time, Hartford was the “Insurance Capital” and the white collar professional class it employed was largely insulated from the stock market crash. As the automobile gained in popularity, the ability to live farther from the workplace increased. New houses filled in the lots next to the older homes, most in the popular Colonial Revival and Tudor styles, and additional side streets were developed.

House construction was put on hold during World War II, when building supplies were diverted to the war effort, and just after the war, when materials were still scarce while the economy shifted from a military to a domestic market. From 1945-1970s, West Hartford experienced a building boom, making up for the pent up demand, but the nature of the architectural style had changed since before the war. Houses were now made as simply and cheaply as possible while still being acceptable to the middle class, with less fine woodwork and detailing. Houses were also built to be more multi-purpose, with the understanding that the average home buyer could not afford hired help. Instead, women were expected to leave the work force, where they had gone to help during the war, and maintain their own homes.

Each house has an interesting story to tell, not only about its architecture and design, but also about its original builders and past occupants. The original owners of these homes include a land owner and farmer, an entrepreneur, an insurance executive, and Travelers Insurance worker. What they had in common was that they all made West Hartford their home and helped shape the landscape of today’s town.