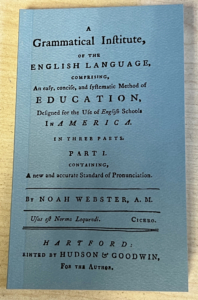 Grab your copy of this pocket-sized facsimile edition of the Blue-Backed Speller. The Blue-Backed Speller, officially titled A Grammatical Institute of the English Language is the textbook Noah Webster wrote for colonial school children. This 120 page reproduction is based on the first edition of the work. Enjoy learning a variety of topics including language, geography, and morals, using Webster’s innovative colonial teaching techniques.

Categories: Books, From the Collection

About the Blue Backed Speller:

During his years as a student and then as a schoolteacher, Noah Webster realized the American education system needed to be updated. Children of all ages were crammed into one-room schoolhouses with no desks, poor books, and untrained teachers. Although this was after the American Revolution, their books came from England, often pledging their allegiance to King George. Webster believed that Americans should learn from American books, so in 1783, he wrote his own textbook: A Grammatical Institute of the English Language. It earned its nickname, the “Blue-Backed Speller”, because of its characteristic blue cover. For over 100 years, Webster’s book taught children to read, spell and pronounce words. It was the most popular American book of its time, selling nearly 100 million copies. Noah’s work on the speller inspired him to advocate for American copyright laws and was the spark that led to his authorship of his most famous work, his dictionary, in 1828.