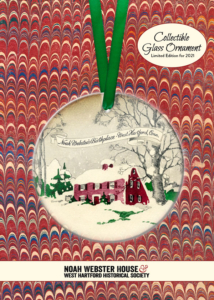 This collectible glass ornament depicts a vintage image of Noah Webster’s birthplace once used in a holiday greeting card by the Hamilton family who lived in the house from 1909 until 1962.

The ornament is printed on glass and produced locally, and makes the perfect gift for friends, family, and neighbors (or for your own tree!).  The cost is $20 – all proceeds to benefit the Noah Webster House & West Hartford Historical Society.

*Our first batch of ornaments have already sold out. Our manufacturer tells us a new batch will coming the week of December 13. When the ornaments are back in stock, they will be available for pick up in the museum shop during normal hours (Monday thru Saturday, 1-4 pm). Shipping will be available for a flat rate of $5 per ornament.*

Noah Webster was born in this simple salt box house in the West Division of Hartford on October 16, 1758. The original four-room house was likely built by Noah’s grandfather in 1720, with the lean-to added in 1787. Members of the Webster family lived here until 1790, when Noah’s father sold the house. In 1909, H.A. Hamilton purchased the house and the surrounding land. The Hamilton family donated the home to the Town of West Hartford in 1962 and our foundation, Noah Webster House, Inc., was created to restore the house and open it to the public as a museum. Today, the restored 18th-century house serves as a place for visitors to learn about Noah Webster, the founding father and creator of the first American dictionary and the “Blue-Backed Speller.” The image depicted on the ornament is from a holiday card that was created by the Hamilton family in the 1930s, in the collection of the Noah Webster House & West Hartford Historical Society.