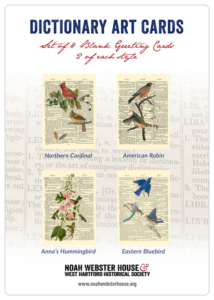 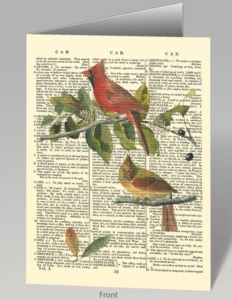 Share your love for language and beautiful birds with this set of 8 notecards. This set of cards features 4 different designs of birds on dictionary pages. This set includes the Northern Cardinal, American Robin, Anna’s Hummingbird, and the Eastern Bluebird. Each bird is superimposed on the page from the dictionary that contained the definition for the bird displayed. The dictionary pages depicted are scans from Noah Webster’s 1828 dictionary. This notecard set contains 8 blank 5″ x 7″cards, with 2 of each different design, and includes 8 plain envelopes.

Note Cards: Winter at the Webster’s