Note Cards: Winter at the Webster’s 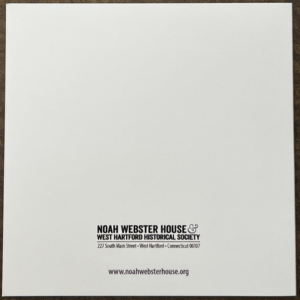 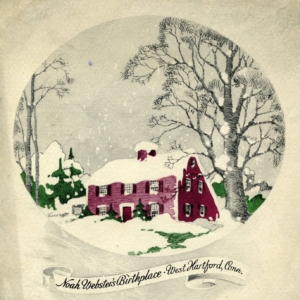 Noah Webster was born in this simple salt box house in the West Division of Hartford on October 16, 1758. The original four-room house was likely built by Noah’s grandfather in 1720, with the lean-to added in 1787. Members of the Webster family lived here until 1790, when Noah’s father sold the house. In 1909, H.A. Hamilton purchased the house and the surrounding land. The Hamilton family donated the home to the Town of West Hartford in 1962 and our foundation, Noah Webster House, Inc., was created to restore the house and open it to the public as a museum. Today, the restored 18th-century house serves as a place for visitors to learn about Noah Webster, the founding father and creator of the first American dictionary and the “Blue-Backed Speller.”