Bristow: Putting the Pieces of an African-American Life Together
(Excerpt from the 2006 Exhibit)

Bristow’s story is not just a story about a man; it is a story about Africa, slavery, Connecticut, freedom and community. It begins with a weathered tombstone in West Hartford’s Center Cemetery. The story continues with the recent naming of a school and with those who carry on Bristow’s memory.

Who was Bristow? At the time of his death in 1814, Bristow was a free African-American who lived much of his life in Hartford’s West Division. In this small outlying farming community, he built a life for himself based on an agrarian economy. A self-made man in many ways, he bought his freedom, became a land owner, and earned the admiration of community members for his vast agricultural knowledge.

Bristow’s life is obscured by the institution of slavery. Evidence is scarce and we have to piece his narrative together with the clues that remain. Recently uncovered documents help us reconstruct aspects of Bristow’s life, but in many cases they have also given rise to even more questions.

Come explore Bristow’s journey and what life might have been like for African-Americans in the West Division of Hartford in the late 18th and early 19th centuries. 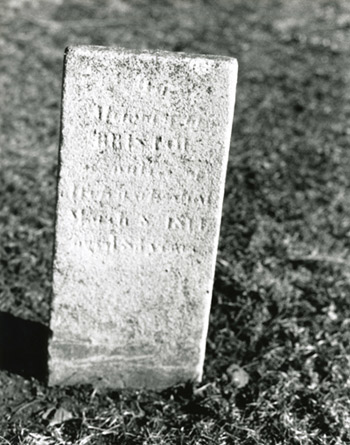 What do we actually know about Bristow’s life? Starting in the 1980s, local residents began unlocking the mystery of the only known African-American buried in West Hartford’s Old Center Burying Yard. This original tombstone provides meaningful clues. It reads:

Africa and the Middle Passage

“A native of Africa,” as Bristow’s tombstone reads, leads us to where his journey begins. By the time Bristow was born around 1731, the institution of slavery had been in existence for centuries in both Africa and Europe. From the early 1600s through the mid-1800s, an estimated 12 million Africans were systematically forced into bondage. During this period, a trans-Atlantic slave trade emerged to feed the labor demands of Europe’s growing colonies in the Americas.

While we lack evidence of Bristow’s homeland, we do know thatnearly all slaves brought to English North America came from the coast and interior of western and west-central Africa. These were diverse regions with well-defined and elaborate cultures. We do not know how old Bristow was when he became enslaved. In his home country, Bristow might have been a farmer, fisherman, a tribal leader, or involved with a trade . . . Or, he might have been a young child painfully wrenched from his family.

Feuding African ethnic groups often captured their adversaries and brought them to ports to trade for goods with ships from Europe and America. As slavery developed, systems of organized trade matured. Placed onto ships, many Africans began the treacherous middle passage across the Atlantic Ocean to the Americas. Captives were chained together and crammed onto ships and had to endure harsh conditions. The brutal journey lasted for approximately 100 days. Many captives did not survive.

One thing we do know about Bristow – this was the last time he saw his native home.

Slavery in New England and the West Division 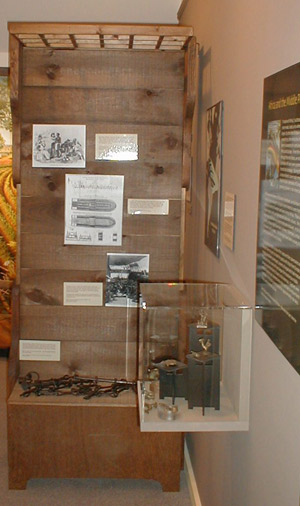 Enslaved Africans like Bristow entered southern New England through large ports such as Boston, New York, and Providence. Bristow may have come through one of these or through a Connecticut port such as New Haven, New London or even the inland port of Hartford. Upon arrival, the captives were often sold through newspaper advertisements.

At first, slavery included the ownership of blacks, Native Americans, and sometimes whites. Many Puritans adopted the biblical tradition which considered slaves to be members of the household. As the roots of slavery became established, blacks were racially designated into a “permanent” role as slave. The end result was that the status of black New England slaves hovered somewhere between humans and property.

In Connecticut, as elsewhere in the North, slaves were often a status symbol. They were owned by well-to-do merchants, shopkeepers, ministers, and professionals in urban areas. However, as is the case with Bristow, many of them found their way to small farms where one or two slaves were put to work doing the needed chores.

In Hartford’s West Division, both enslaved and free blacks played a small, but significant role in the economic and cultural vitality of this rural village. Blacks were involved with farms, businesses, and trades, impacting society through economics and culture.

Life with the Hooker Family

A missing part of the puzzle is how Bristow came to live in Hartford’s West Division. We know that by the 1770s he was enslaved to Thomas Hart and Sarah Whitman Hooker on their prosperous farm on Four Mile Hill. When Bristow lived there it was a large center-chimney home with an eastern view of Hartford.

Both Thomas and Sarah’s families had been influential in Connecticut’s founding and the West Division’s development. Sarah Whitman Hooker was the daughter of John Whitman who owned one of the stores in town. Roger Hooker, Thomas’ brother, lived in Farmington and was involved in the West Indies trade. Another relative, Nathaniel Hooker, was the second minister of the West Division and a slaveholder. 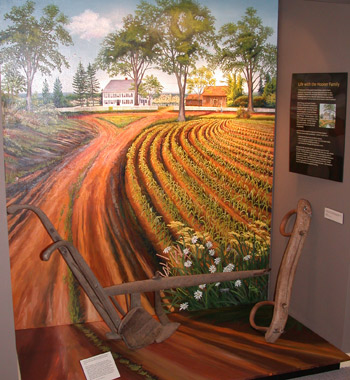 How did Bristow become enslaved to Thomas Hooker? There are several likely possibilities. Hooker might have:

During the 18th and 19th century, agriculture was the West Division’s primary industry, producing Indian corn, rye, oats, wheat, and flax. To bring these crops to harvest, some farmers used enslaved African laborers. A 19th-century account described Bristow’s farming knowledge suggesting that he was an agricultural slave. On the Hooker farm, Bristow would have plowed fields, tended livestock, and performed numerous laborious tasks – all needed to keep an 18th-century household running.

According to local legend, on the eve of the American Revolution, Thomas Hooker could not bear to fight for his country’s freedom and leave a slave at home . . . so he freed Bristow. Evidence, however, provides a different story.

On May 9, 1775, Bristow bought his freedom from the Hookers. His manumission paper, a document confirming a slave’s freedom, states:

“Know all men…that I Thomas Hart Hooker of Hartford in the county of Hartford for the consideration of sixty pounds received to my full satisfaction do by these precincts fully, freely, and absolutely release, manumit, and set at full liberty a certain negro man named Bristow.”

How was Bristow able to buy his freedom? It could be that Hooker understood the double standard of fighting for one’s own country while denying a human his or her individual liberty. However, the Hookers still had at least one other slave in their household. Hooker might have also neededmoney as he was going off to war. According to a 19th-century family genealogy, Thomas Hooker had “squandered his inheritance” and had to borrow money from family members. Whatever the situation, Bristow was able to save 60 pounds (worth approximately $9,500 in today’s currency). 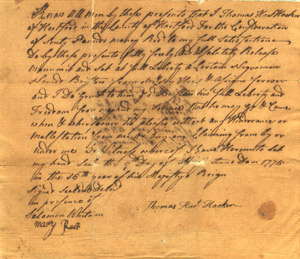 As did many slaves during this time period, Bristow most likely hired himself out to raise enough money to buy his freedom. However, this was not the only option for slaves. At the time of the Revolution, enslaved Africans had several possible routes out of slavery. Some chose to join the militia or Continental Army, where they might be able to negotiate manumission through military service. Others decided that they were already free and ran away.

Bristow obtained his freedom, which brought a number of opportunities, but it also came with limitations.

One of the most interesting aspects of Bristow’s life is that although he bought his freedom in 1775, he remained closely connected with the Hooker family for the rest of his life.

When Bristow died on March 8, 1814, he left in his will all of his property to Thomas and Sarah Hooker’s children, Thomas and Abigail. Why did Bristow write a will and move back with Sarah Hooker? And why would he leave all of his earthly possessions to the family to which he was once enslaved? Perhaps he was ill and needed care. Perhaps he missed the sense of community he had experienced at the Hooker’s home in the West Division. These are some of the mysteries of Bristow’s life that may never be answered.

We do know that when he died, Bristow was honored with a gravestone in West Hartford’s Old Center Burying Yard. That Bristow’s grave is the only marked one belonging to an African-American in the cemetery is indicative of the importance he held in the community.

What is Bristow’s legacy?

Bristow’s story tells us much about the values, beliefs and attitudes of the society who enslaved him. It continues to reflect our community with the recent dedication of the Bristow Middle School in West Hartford.

How the Bristow Middle School was Named 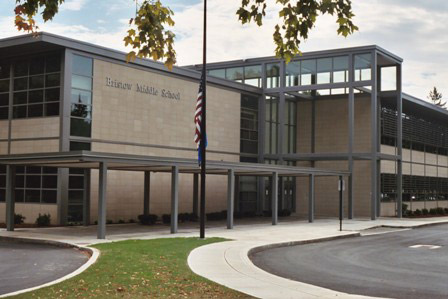 West Hartford resident, Dr. Booker T. DeVaughn, first learned of Bristow in 1987 while serving on a committee at the Noah Webster House. He became fascinated with Bristow who was cited in the town’s earliest history and was the only known African-American buried with a gravestone in the town’s oldest cemetery. In 2003, the West Hartford African American Social and Cultural Organization (WHAASCO) commissioned a new gravestone to replace the badly eroded original one and sponsored a Headstone Rededication Program in June 2004.

In October 2003, Dr. DeVaughn wrote a letter nominating Bristow as the name for the planned third middle school. That letter, signed also by then Town Historian, Mrs. Miriam Butterworth, stressed that Bristow’s life was a great American story. In June 2004, the School Naming Committee recommended to the Board of Education two names for the new middle school, one of which was Bristow. In October 2004, the Board of Education voted in favor of naming the new middle school after Bristow.

On September 27, 2005, the Town officially dedicated the Bristow Middle School.